Leopards suffered their first league defeat of the season as they went down 97-79 at Sussex Bears on Saturday . The game saw the Big Cats shoot an incredible 24 more field goal attempts than the Bears, but converted only 32 percent of them as a 33-12 final period saw the home side chalk up the win .
Dougie Bennett led the visitors with 19 points and five assists while John Sodipo had seven rebounds and as many assists to go with his 14 points .
The teams shared 38 first period points, and a Jamie Hayes free-throw put his side 30-24 ahead three minutes into the second quarter.
But a Bud Johnston trey put Bears ahead by one at the midway stage of the period and a lay-up from Daren Mason – who led his team with 40 points and 16 rebounds – helped the hosts lead 45-38 going into the half-time break .
The visitors still trailed by seven after four third period minutes, but Shodip launched a 14-3 run capped by a Will Ashby basket to lead by a point with 3:34 on the clock .
Ruben Saiz Colon’s jump shot put the visitors 67-64 ahead at the final break but that was as good as it got for the Big Cats and Mason’s tip-in with two fourth period minutes gone gave Bears a lead they would never lose .

Leopards saw their defence of the National Cup ended at the last 16 stage with a 73-70 loss against Canary Wharf London Lituanica at the Brentwood Centre on Sunday afternoon .

National Cup rules state that Division One teams may only play one American against lower division teams, meaning that guard Simon Cummings was left out of the side, and against a side packed with quality Lithuanian players, the Big Cats found the going tough .

The home side led by as many as six with three minutes of the third period remaining, but two Sidagas free-throws with 11.3 seconds remaining gave the visitors a three point lead, and after a time-out Leopards were unable to get the ball to Carl Josey and coach Robert Youngblood ended up taking a hail-Mary three pointer which failed to connect .

Taner Adu led the Leopards’ scoring with 25 points while Josey had another double-double with 21 points and 12 rebounds. Youngblood also had 12 boards to go with his eight points, while Greg Hernandez finished with 12 points, five rebounds and four assists .

Jakumavicius opened the scoring for the visitors with a three and added a pair of foul shots as Canary Wharf started well, but a Josey trey capped an 8-2 run that saw Leopards take a 10-5 lead after five minutes of action .

That lead grew to eight following another Josey score from the Land of Plenty, but the visitors finished the period on a 7-2 run to cut Leopards’ lead to 20-16 at the first break .

Josey was the only Leopard to trouble the scorer in the first four minutes as his five points kept them level as Rasamavicius tied the game at 25 and the same player put Canary Wharf 30-25 up as he capped a 7-0 run .

Adu stepped up in the final three minutes of the half as he hit six points, including the final basket as the teams went into the locker room tied at 34 .

Lawrence Brown opened the second half scoring for the Big Cats, but the game remained tight until Josey made it 51-45 with 4:29 on the clock.

That proved to be as good as it got for the hosts, though, as Canary Wharf replied with an 8-0 run capped by Bagdonas’ long two to send his side into the final break with 53-51 lead .

Adu put the Big Cats back into the lead with an and-one to open the fourth period, and they looked to have taken control of the game as Josey hit a jump shot to make it 60-55 with three minutes gone .

But the Lithuanians wouldn’t lie down, answering with a 9-0 run as Bernotas put them 64-60 ahead and forced a timeout from Youngblood with 6:20 on the clock.

Scores from Hernandez and Youngblood tied the game again, but the visitors regained a narrow lead and held it until 1:26 mark when Youngblood scored off Hernandez’s assit.

Virketis put the Lithuanians up by two with 61 seconds remaining, and they never let that lead slip despite a massive block from Youngblood as Leopards suffered only their second defeat by a lower division team in their nine year history. 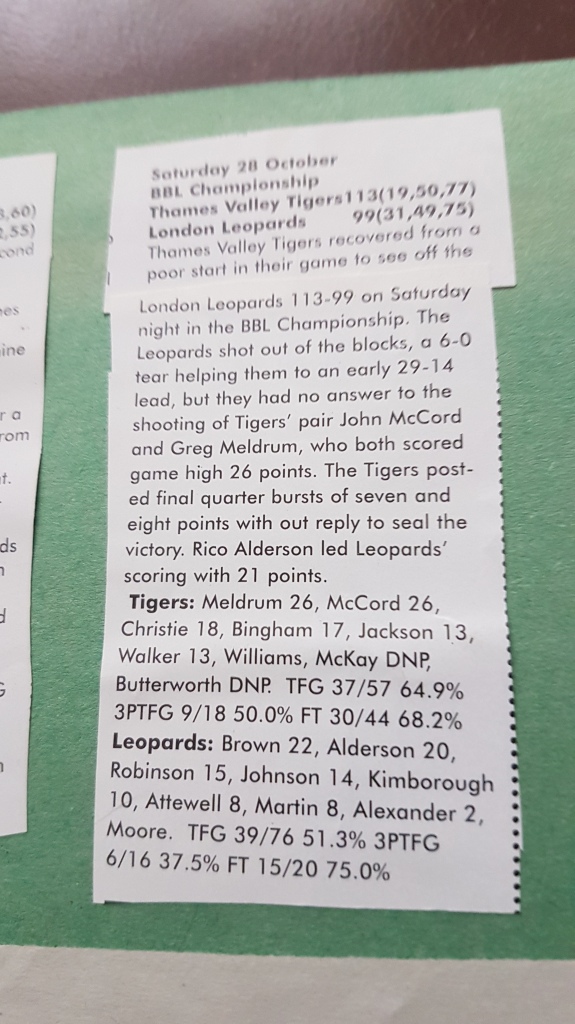