London United 72 (18,40,58)
Essex & Herts Leopards 78 (16,33,50)
Leopards’ best league performance of the season saw them move into pole position in the race for the play-offs. Nineteen unanswered points in the fourth period proved to be turning point as the Big Cats defeated high-flying United for the second time this season.
With London Capitals losing both games this weekend, and Solent also suffering a defeat, Leopards now have their play-off destiny firmly in their own hands. In contrast, United’s third league defeat of the campaign effectively ended their title chances. Balanced scoring proved to the be the key for Jon Burnell’s team, with Brian Moore (pictured), Troy Selvey, and Steve Ogunjimi all hit 18 points. It was Ogunjimi who took control in the final period, hitting 11 points and proving to be deadly from the charity stripe as he iced the victory with six straight free-throws.
The visitors started strongly, and with Moore draining a pair of jumps shots, they led 8-4 at the midway. Despite Laurent Irish being forced to sit down on two fouls, three points from Selvey kept Leopards in front before a pair of threes from United’s Jack Jagodka put the home side into the driving seat. Further scores from Walid Mumuni and the imposing Mantia Callender sent London into the first break 18-16 ahead, and the same two players hit three-pointers and the hosts opened the second period with a 10-0 run.
A time-out from Burnell did little to halt the hosts’ domination, and with Selvey missing a pair of free-throws, an “and-one” from Callender saw the lead balloon to 14 midway through the period. A Moore trey finally kick-started the Leopards, and despite continuing to struggle from the line, they finished the half with an 8-2 run, seven of which came from Selvey, to trail 40-33 at half-time.
The third period saw the teams exchange baskets for long periods, with the main talking point being an extremely harsh intentional foul call on Brian Moore. The Leopards player-assistant coach recovered his composure to drain a three, but a pair of treys from Jagodka and Callender put United 12 up with three minutes of the period remaining. Selvey took the lead back down to 10, but missed the bonus, before an Ogunjimi trey and a Roger Lloyd put-back sent Leopards into the final break trailing by eight.
Irish opened the fourth period scoring with a pair of baskets, and although Jack Majewski called a time-out, Leopards continued to pile on the points. A Selvey put-back and an Ogunjimi trey saw Leopards regain the lead, and they never trailed again. United did not help themselves by conceding a technical foul for having six players on the court, and they also lost power-forward Damien Reid after he fouled out when for the third time he was called for an offensive charge on Selvey. Grapci also fouled out before a Moore trey and scores from Lloyd and Ogunjimi wrapped up the 19-0 run, leaving Leopards 69-58 ahead with 3:24 on the clock.
Steve Vear cut the lead to seven with a four-point play, before Lloyd continued his fine fourth quarter with a basket off Irish’s assist. Callender drained his fourth trey of the game to take the lead down to five, but that was as close as United came, and Leopards sealed a superb victory from the free-throw line.
Leopards: S Ogunjimi (18), T Selvey (18), B Moore (18), L Irish (8), R Lloyd (7), M Quashie (6), R Alexander (3), M Eames, B Stacey (DNP)
Juniors
The U16 boys destroyed London Capitals 104-33 but the U16 girls were well beaten by the league leaders Haringey Angels 29-66.

Levett Leopards’ return the Brentwood Centre ended in disappointment as they went down 51-48 against London Lituanica, on Sunday. Points were at a premium in one of Leopards’ lowing-scoring game in their history with just 14 points in the points in the first period, and that set the tone for the rest of the game..

Both teams came into the game short-handed, with Will Ashby and Dougie Bennett playing in the university final eight tournament, and Lituanica kitted up only seven players.

Tom Martin split a pair of free-throws to open the scoring after two minutes before scores from Courtney Van Beest and Justin Hitchman put the home side 8-3 ahead with 3:37 remaining in the first period but that was the last time they troubled the scorers before the first break as Vaupsas cut the lead to 8-6.

Hitchman opened the second period scoring to launch a 12-2 run capped by a pair of Albert Margai foul shots as Leopards opened a 20-8 lead at the midway stage of the quarter.

That proved to be as good as it got for the hosts as Edvinas Vaupsas converted back-to-back and-ones, and only Margai and Hitchman got on the scoreboard in the final five minutes of the second half as the home side took a 23-18 lead into the locker room.

That lead was wiped out with an 11-2 run to open the second half, only Tosin Oyelese getting on the scoresheet for Leopards, but scores from Brian Nguru and Jamie Hayes dragged the hosts back into the game, and Nguru hit a triple to give the hosts a 38-32 lead at the final break.

Ladi Brown hit one from three free-throws to extend the lead at the start of the fourth period but Julius Kazlauskas hit a three to cap a 9-0 run from the visitors that gave them a lead they would never lose.

The hosts trailed by seven with 62 seconds remaining but an unlikely comeback looked possible as Hitchman scored before Margai stole the ball and set up Van Beest to make it a three point game.

Some tough defence forced a turnover with 13 seconds remaining but the Big Cats failed to even get a shot up as the Lithuanians held on for the win.

Nguru and Hitchman led the home side with 11 points apiece while Margai added seven points and three assists. Van Beest finished with six points, seven rebounds, two assists and a block. Povilas Rasamavicius led the visitors with 12 points, while Vaupsas was a point short of a double-double with 15 rebounds. 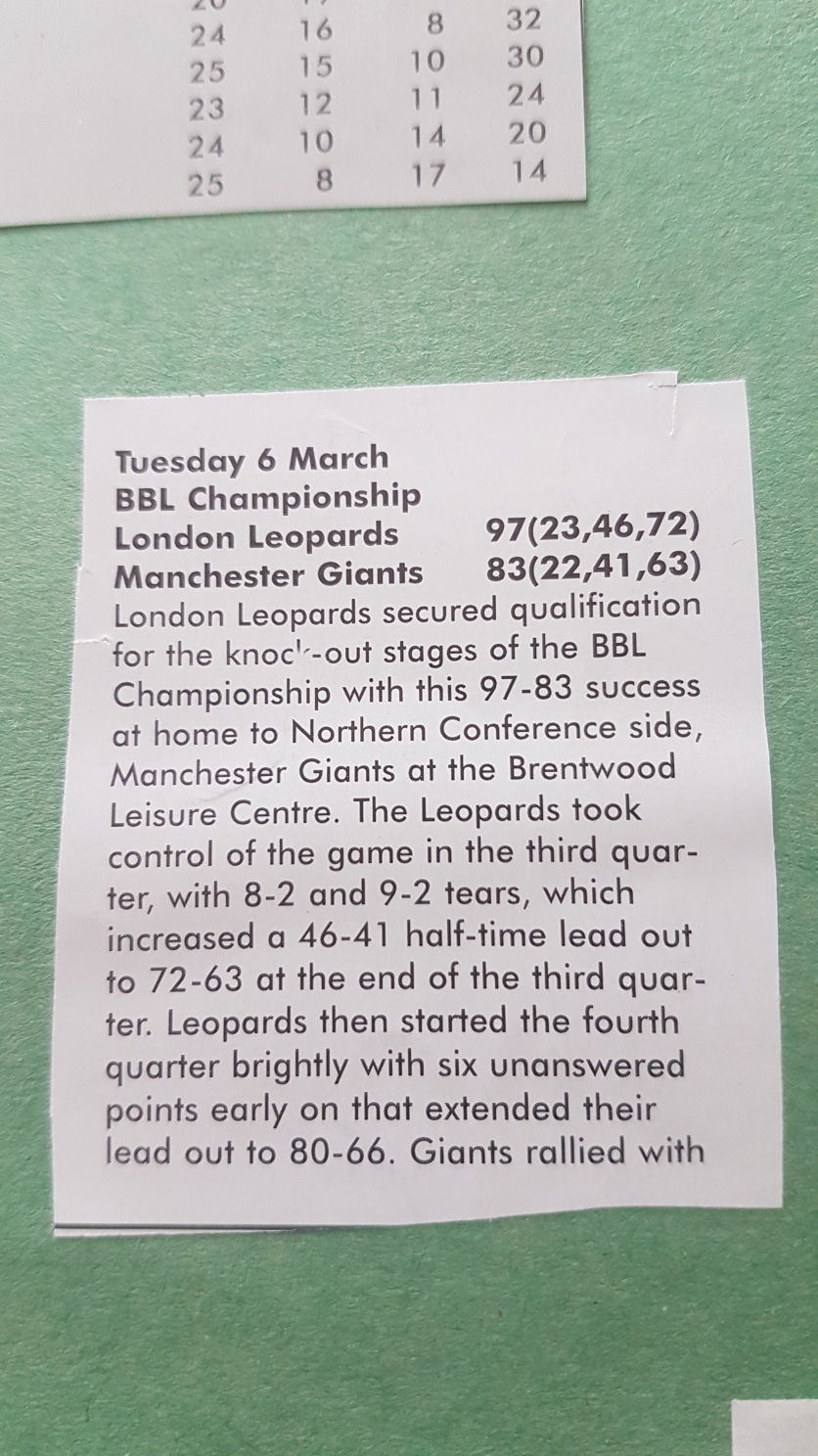