Leopards’ Stat-man Tony Shorey caught up with Leopards’ first coach back in 2011.

1. How did you end up coaching the Leopards? 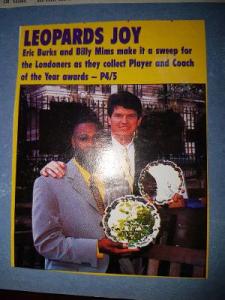 In the summer of 1994, I was running a summer basketball camp as the Head Coach at an NCAA DII school, Barry University in Miami, Florida, when I got a telephone call from Barry Dow in London. We had just come off a great season at Barry and my best player, Anthel Hicks, was a 1st Team NCAA DII All-American and pro prospect. Barry was calling to tell me about a new franchise he was helping to start in London and wanted to talk with me about Anthel as a prospect for his team, the Leopards. I did everything I could to sell Anthel to him and spent over an hour on the phone with him. The next day, he called me back to see if I was interested in coaching overseas. He wanted to fly me to London ASAP and interview me for the Leopards head coaching position.

On Friday of that week, as soon as our camp ended, I went straight to Miami International Airport and boarded a flight for England. Barry Dow picked me up at Gatwick early that Saturday morning and took me straight to the Guilford Spectrum to watch a workout of potential English players. After a whirlwind weekend in London, I accepted the job on Sunday night over dinner at Planet Hollywood in Piccadilly Circus with Harvey Goldsmith and Barry Dow. Little did I know just how much that dinner, that night, would change my life!

2. How did you enjoy your time in England at the Leopards?

I loved my time living in London and coaching the Leopards. 1994 to 1999 were probably 5 of the best years ever in my coaching career. We never had a losing season. We won 2 BBL League Titles (the first team to win back-to-back league titles in six years), we won the National Cup once, we returned to the Cup Final once more, and we reached the BBL Final at Wembley once also. We produced 2 BBL players of the year (Eric Burks and John White), and I was chosen to coach the South squad in the prestigious BBL All-Star game twice by the fans of British basketball (by the way – I believe I’m still the only BBL coach to coach in the All-Star game more than once and never lose, also setting the record for coaching the team to score the most points in BBL All-Star game history!) I have such fond memories of those Leopards teams that I coached, but English basketball and my time at the Leopards brought me something way more important than silverware or championships. I met my wife Lynne one night while dining in Planet Hollywood, our club sponsor for those first few years. We were later married in a fairytale setting in a 1000 year old church in Hythe overlooking the English Channel and my entire Leopards team stood beside me at the wedding! All three of my wonderful children, Courtney, Callie, and Josh were born in England. I have many friends and family still in England, so it will always feel like part of my home to me. Who knows, one day I may return to live there again!

I guess one of the most memorable Leopards games I coached would be the great come-from-behind victory over our arch rivals, the Towers, on SKY TV at Wembley Court. We were 20 points down at half-time and our star player Eric Burks was out with an injury. He came out the locker room from half-time in street clothes done for the night. John White took over in the second half and we had a great contribution from two of our English kids late in the game, especially Paul “Cherry” Mundy-Castle.

I also remember winning the National Cup for the first time in 1997 against Sheffield on their own floor. Again we trailed at half-time, but Burks and White were

brilliant in the second half and we won the club’s first piece of domestic silverware. How could I ever forget the great win we had in Sheffield over current GB coach Chris Finch and ex-NBA player John Amaechi to claim our second straight BBL title in 1998. Ryan Cuff had been thrown out of the game in very questionable circumstances, but it was Mike DeFoe’s great defense on Amaechi and Robert Youngblood’s resilience that carried us on. Our motto was “RTL – Refuse To Lose” and that night, we practiced what we preached!

4. Are you still in touch with any of the old Leopards?

Yes, I speak often to Eric Burks, whose now the Director of Recreational Sports at my college alma mater, Charleston Southern University. I also talk to Robert Youngblood regularly. He and his wife have bought a home in Orlando not too far away from us, so we get to see them when he’s over here for visits. John White is back in Atlanta, Georgia and we speak every now and then. I also see Karl Brown each year when I return to England in the TV studios working together on the NBA Finals for British Television. My old Leopards assistant coach and close friend, Mark Clark, is doing a great job of developing young English basketball players along with another former Leopards player of mine, Lloyd Gardner at Barking Abbey Academy. I talk to them both regularly with strong regards to recruiting. One of these days, I’m going to get a great English player from them for my team here in Florida!

5. Where did you go next after your time at the Leopards?

From Leopards, I went on to coach another BBL franchise, the Leicester Riders where as fate would have it, my first game in charge at Leicester would be against my old club. In a standing room only Granby Halls, we beat the Leopards and Bob Donewald, the coach who had replaced me. I almost had tears in my eyes prior to tip-off that night as every single Leopards player came over to my Leicester bench and gave me a big hug to welcome me back to the BBL. Eighteen months later, I led Leicester to a double championship season, winning both the 2001 National Cup (again against Donewald and the Leopards with the help of another ex-Leopard, Larry Johnson) and the 2001 BBL Championship at Wembley Arena against Chris Finch and his Sheffield Sharks. I am very proud that those are still the only two trophies ever won by Leicester (the BBL’s oldest club) at the premiership level!

I am now entering my 5th season as the Head Coach at Florida Tech, an NCAA DII school located in Melbourne, Florida just south of Cocoa Beach and the Kennedy Space Center on the east coast and about 50 miles east of Orlando. Needless to say, my children do love their days out at Disney or Universal Studios. The university is 50 years old here and in my third season, I led the Panthers to only their 5th 20-win season in program history and our highest ever national ranking, #11 in the nation! I have used my time in Europe wisely to help in my recruiting here. Currently our best player is a 6’9″ small forward from Pezinok, Slovakia. He plays for the Slovak senior men’s national team, and as a pre-season All-American candidate this year, he is a legitimate NBA prospect. We also have a 6’9″ centre from Riga, Latvia, a 6’10″ centre from Dublin, Ireland, and a 6’3″ guard from Istanbul, Turkey. One day, I’d like to have an English lad here playing for me as well, maybe one developed in the Leopards youth programme! We also return four sophomores who were forced to start last year as freshman due to injuries, and one of them was last year’s Sunshine State Conference “Rookie of the Year.” We start official practice on October 15, and our first game this season will be on Sunday afternoon, November 15. We feel like we have a real good team and can’t wait for the start of the season. You can follow us on the web if you like as we televise most of our games over the internet, www.floridatechsports.com. I will certainly be following the London Leopards all season too. Good luck!!!

That man could certainly talk! An interview with him while he was with Riders and some stuff about life after the BBL.