25 years of Leopards – the NBL coaches

Six coaches in 16 years isn’t a bad record for the current version of the Leopards, and shows a certain amount of patience – especially as the two years working with Barking Abbey saw the club have a different coach each season.

Jon Burnell 2004-2010
Still the longest serving coach across the two versions of the Leopards, having coached the new Big Cats during the first six seasons of their existence. A former England junior international who had played for Crystal Palace and Hemel Royals, he had finished the season as Ware Rebels’ coach, having taken over from Mark Clark early in the campaign, and had also coached Stevenage Rebels for a spell before the decamped to Worthing

2003/4 proved to be a difficult transition for everyone at the new club, but after a sticky start to the following campaign, Burnell’s team came good in the National Cup and lifted the trophy with a thrilling win against Reading at the NIA. Burnell’s first five seasons saw appearances in the post-season, with the 2008/9 campaign the most successful in the league with a third place finish and semi-final appearances in both the play-offs and Trophy. Financial problems in Burnell’s final season saw Leopards finish outside the play-offs for the only time, although they did reach the Cup semi-final, but the link up with Barking Abbey saw Burnell leave the club in the summer of 2010 – signing off with a farewell game against Essex Pirates at Brentwood .
After leaving Leopards, Burnell became involved with Hemel Storm (who, as West Herts Warriors, he had successfully coached against multiple times) where his son was playing and is now the Herts’ club’s director of basketball.

Mark Clark 2010/11
A familiar name to both strands that had merged to form the new Leopards replaced Jon Burnell as Mark Clark took over for what proved to be a single season stint. Clark had been a long term coach of Ware Fire/Rebels as and had been assistant coach for the Big Cats in the two-year period when they won back-to-back BBL titles and the National Cup  He had also coached at international level with both England and GB women. With Leopards having teamed up with Barking Abbey Academy, where Clark was director of basketball, he became the Big Cats’ head coach for the inaugural season of the link-up and led a largely inexperienced squad to the new club’s highest ever league position – second – as well as the semi-finals of both the play-offs and Trophy as well as the quarter-finals of the Cup. His mid-season signing of Ousman Krubally was just too late to deny Bristol Flyers the title, but the American forward proved to be key in the following season’s success. Clark remains the director of basketball at Barking Abbey, and coached London L:ions to a perfect WBBL season in 2021/22 – winning all 34 domestic games – and shocking French powerhouse Bourges..

Dejan Mihevc 2011/12
Clark handed over the coaching reigns in the summer of 2011 to concentrate on running the whole Barking Abbey programme. His replacement was 33-year-old Dejan Mihevc who had coached BA’s Division Three side the previous by had a wealth of experience with the Slovenian under-14, under-15 and under-16 sides as well as being assistant coach for the under-18 team and general manager of the country’s youth teams. He may have had the biggest budget in the second Leopards’ history thanks to the Hoops 4 Health coaching , but Mihevc recruited well, adding eventual league MVP Vernon Teel, David Buchberger and John Lister to a talented young roster and the retuning Krubally. The National Trophy group stage proved to be a good warm-up for Mihevc’s team, and although the opening five league games provided only one win, when the team clicked they proved almost unstoppable . While Mihevc’s team were undoubtedly very talented, they also practiced at a level on par with many professional teams, and the reward was a league, play-off and National Cup treble. Leopards’ partnership with Barking Abbey ended in the summer of 2012 and Mihevc returned to his native Slovenia were he coached several top flight clubs before moving on to Polish club Polski Cukier.

Robert Youngblood 2012-2015
With Leopards looking to move after the Barking Abbey era, they turned to the man who had captained the BBL Big Cats for more than half their history Youngblood had expressed an interest in the job even before it became available and he was announced as the club’s first player-coach shortly after the treble winning season concluded. His first season proved tough at times, but he did manage to add the one piece of silverware – the National Trophy – that eluded the club the previous season with a thrilling win against Tees Valley Mohawks where he stepped up in overtime to lead his team to victory. League form was inconsistent but the team finished strongly to finish fourth and wrap up a third straight visit to the Final Four. Youngblood’s second year saw an improvement in league form as they pushed Reading all the way before having to settle for second spot and another play-off semi-final. But what proved to be his final season saw Leopards go one better as a crazy afternoon at the Brentwood Centre saw them win the Division One title with a game to spare.
The reasons were never really clear, but Youngblood chose not to remain with the Big Cats after that success and subsequently went on to be an assistant coach with London Lions (having played for them in their Milton Keynes days) and led Hemel Storm to a National Cup success in 2018. He left Storm the following summer and now coaches junior basketball in the Brentwood area.

Steve Ogunjimi 2015-2017
For the first time in club history – both versions – Leopards advertised for their next coach, but it was a former player who was given the job following the appointment of Steve Ogunjimi. The British guard – who’s Nigerian roots meant he’d represented them – had played for old Leopards in two spells, in the Billy Mims/Bob Donewald season and in the final campaign under Mike Taylor. He had also joined the new Big Cats midway through their first season and helped them win the National Cup in December 2005.
Although new Home Office rules meant that Leopards were without any Americans, the new coach did retain the majority of the previous year’s roster, and finished sixth with a 16-10 record as well as reaching the National Cup quarter-finals. Pre-season in 2016 proved to be difficult with players holding out for money that the club simply didn’t have, and the friendlies didn’t serve much purpose other than an decent crowd against Team USA Select. The lack of preparation showed in the Trophy campaign as Leopards failed to get out of the group stage, but early season league games were encouraging and after Ogunjimi had led the club to its first BBL Trophy win as a D1 club they reached the mid-stage of the season with a 5-8 record and could realistically look towards the play-offs. Ultimately it was a mounting injury list which ended Ogunjimi’s fourth spell with the Leopards. He resigned after the dismal home loss against Westminster but coached the next three games to help out the club, but following a spanking by Hemel at Brentwood, he left the club. 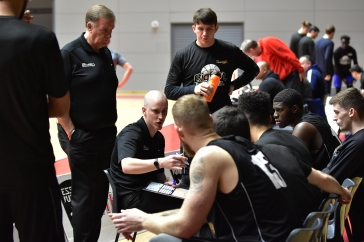 It was a tough job for Thomas Baker as Leopards turned to their partners Oaklands College for their new coach The youngest play-caller in the Big Cats’ history was also the University of Hertfordshire men’s head coach as well as the East of England under-15 boys head coach. He had also been involved in the England national team as the under-18s women’s performance analyst and also the East Region under-17 women’s head coach. Baker initially joined on an interim basis, but opened with two single point defeats and a double overtime loss, leading to relegation. But he won the final game of the season and was appointed permanent coach within a week of that victory at Worthing. Leopards’ season in Division Two proved to be tougher than expected, but ultimately their fourth place finish was enough to return to the top flight. After a tough start to life in Division One, 12 wins in the space of 16 games was enough to reach the play-offs. The curtailed 2019/20 proved to be even tougher before three straight wins sealed another season of Division One basketball.