In contrast to Saturday’s loss against Reading Rockets, the victory against Division Two side Bears saw the game won in the third period as Leopards overcame a 39-35 half-time deficit to blow the home side away with a 35-16 quarter .

Hazeef Abdul continued his fine season with 32 points, with Teni Mongo and Marius Kaetaniukasis adding nine each while Duru and James Cummings scoring eight apiece in a balanced scoring effort . The Big Cats will now host Reading in the last eight on Sunday December 15.
Thomas Baker’s side started slowly with the home team scoring the first six points of the game, and it took treys from Abdul and Prince Lartey to keep them in touch,
But a basket from Ray Akpofure launched an 11-0 run as Kaftaniukas drained a trey top help his side lead 21-15 at the first break .
The second period proved to be a battle of attrition. Cummings put his side 28-21 up with 6:51 on the clock, only the for hosts to reply with a 9-2 run to force inside two and a half minutes a timeout from Baker .
That run was extended to 15-2 as Leopards were repeatedly beaten in transition and although Mongo splashed a triple Abdul hit a jumper, the hosts went into the locker room ahead by four .
Baker’s words at half-time certainly hit the mark as Mongo and Abdul both scored from downtown, and another Abdul triple gave Leopards a comfortable lead .

Another pair of Abdul treys along with one from Lartey and an Akpofure basket saw Leopards reel off 11 points to put them up by ten and they would never trail again .
It was still a ten point game heading into the final minute of the period before Abdul hit a pair at the foul line and Okoro converted an and-one to put his side 70-55 ahead going into the final break .
Cummings made it a 17 point game with the first score of the fourth period, and the Hatfield-based player hit a pair of free-throws to keep :Leopards in control .
But Bears had one more run left in them as they scored 12 of the next 14 points, and reduced the arrears to 82-76 with 1.53 on the clock when the hosts called a timeout .
That break didn’t work for the home side as Abdul sunk a trey and Leopards never looked back as they progressed to the last eight..

Luke Mascall-Wright led the way for the second straight week as Leopards collected their first league win of the season with a 95-84 victory against Leicester Warriors, on Saturday .
Mascall-Wright finished with 17 points, eight rebounds and seven assists as the Big Cats only trailed for 51 seconds in a commanding performance .
Captain Sam Newman added 11 points, nine assists and six boards while Lee Hodges missed out on a double-double by a single rebound as he finished with 15 points .

In a balanced scoring effort Findlay Wood added nine points, with Rory Winter, KJ Lee and Asante Sandiford chipping in with eight points apiece, although the latter’s debut was marred as he picked up two technical fouls and was ejected in the fourth period .
Three-point shooting proved to be the key for the home side as Leopards drained 14 of their 30 shots from the Land of Plenty, while their dominance on the boards saw them out-rebound the Warriors 46-30 as well as dishing out 33 assists .
The sides shared 46 first period points before Leopards took control with a 16-5 run to open the second quarter, and they went into the locker room leading 52-40 ahead .
That lead steadily increased during the third stanza as the Big Cats took an 80-60 lead into the final break.
But the visitors fought their way back into the game with ten unanswered points before a big trey from Newman wrapped up the win .
Pakadashe Chingombe led the visitors with 28 points and eight rebounds, with Lamin Willan adding 22 points for an eight-man Warriors side.

Nurishment Leicester Riders 83 (30,42,64)
Tim Moore 24, Billy Singleton 21, Jermaine Brown 13
DG London Leopards Kool Kats 86 (24,44,59)
Mo Robinson 21, Rico Alderson 19, Rod Brown 19
BBL Trophy, group A @ Loughborough University
DG London Leopards Kool Kats began their BBL trophy campaign with an 86-83 victory over Nurishment Leicester Riders.
It was a see-saw game throughout with neither side holding the lead for long, but with Leicester in foul trouble Leopards were able to seal it from the line. Mo Robinson led the Leopards with 21 points, but Tim Moore had a game high 24 for Leicester.

Coventry Crusaders 78 (23,35,61 Leopards 91 (13,46,67)
A season-high 20 points from Fola Adeleke helped Leopards maintain their prefect start to the EBL Division One season with a hard fought victory at Coventry, on Saturday.
19-year-old Adeleke scored ten second period points to almost single handedly drag Leopards back into the game after an error-strewn first quarter had seen them fall 10 point behind. Gareth Laws added 15 points for the Big Cats, while a clearly injured Carl Latham-Henry chipped in with 13 as Leopards made it three wins from three.
Lee McCarthy opened the scoring from close range, but generally the first period proved to be a sluggish one for the visitors, and after four points from Latham-Henry had seem the trail 9-8 at the midway stage of the period, the home side hit 11 straight points to lead 20-9 going into the final period of the quarter. An “and-one” from Stix Bright finally broke the run, and although Ben Clarke replied with a trey, McCarthy wrapped up the first period scoring to send Leopards into the first break trailing 23-13.
The second period proved to be a complete contrast as Leopards started strongly, with Adeleke opened with back-to-back baskets before sinking a three-pointer to cu the deficit to 25-20.
A basket from the game’s leading scorer – Ryan Leuthy, who finished with 30 points – kept Crusaders ahead, before treys from Sam Salter and Adeleke saw the deficit reduced to 28-27. Leuthy again drained an effort from long range, but six straight points from Laws saw Leopards take the lead for the first time at 33-31 with three second period minutes remaining.
A good spell from Lukas Volskis saw him take over from where Adeleke and Laws had left off, scoring eight straight points including two three-point plays before Salter wrapped up a 33-12 second quarter with a trey to send Leopards into the locker room with a 46-35 lead.
If Leopards thought that the game was in the bag, they were to be mistaken as the opening minutes of the third period bore a strong similarity to the first. Five straight Leuthy points saw the lead cut to 46-40, and only two treys from Adeleke and one from Salter kept Leopards ahead, reach the our minute mark with a slender 56-54 lead.
Some woeful foul shooting did not help their cause as they scored just three points from eight attempts, but after Hall had leveled the score going into the final minute, three-pointers from Laws and Volskis sent Leopards into the final break with a 67-61 lead.
An “and-one” from Laws opened the fourth period scoring, but the home side refused to give in, and a 6-2 run saw the gap closed to 72-69 at the midway point in the quarter. Leopards finally stepped up at that stage, and scores from McCarthy and Latham-Henry together with a Laws’ three saw the lead grow to ten.
Two-from-four Bright foul shooting followed before Latham-Henry wrapped up an 11-0 run to put Leopards 83-69 ahead. A pair of Clarke treys kept Crusaders in with a shout, but despite Leopards poor foul shooting continued (they finished with 17 from 32), the visitors finished strongly to score the final five points of the game and maintain their best ever start to the league season.
Leopards: F Adeleke 20, G Laws 15, C Latham-Henry 13, S Bright 12, L Volskis 12, S Salter 9, L McCarthy 8, M Eames 2, M Collins.

Leopards’ poorest performance of the season saw them lose 80-65 at Derby Trailblazers on Saturday evening .

Against a side who had lost their first vcars.co.uk Division One games of the season, the Big Cats never really got going as coach Robert Youngblood admitted: “We just couldn’t hit anything on Saturday, we didn’t have a single assist in the first half, and it wasn’t acceptable.”

Youngblood sat out the game with a sore knee and his side hit only a third of their 66 field goal attempts .

A tight first period saw Trailblazers lead 18-15, but Leopards were outscored 14-7 in the first five minutes of the second period and went into the locker room trailing 45-31 at half-time .

The Derby lead peaked at 29 points in the third period before Leopards went into the final break trailing 71-49.  Leopards did out score the hosts 16-9 in the final period, holding them t to a single points in the final five minutes, but it was too late to prevent a second league loss of the campaign . 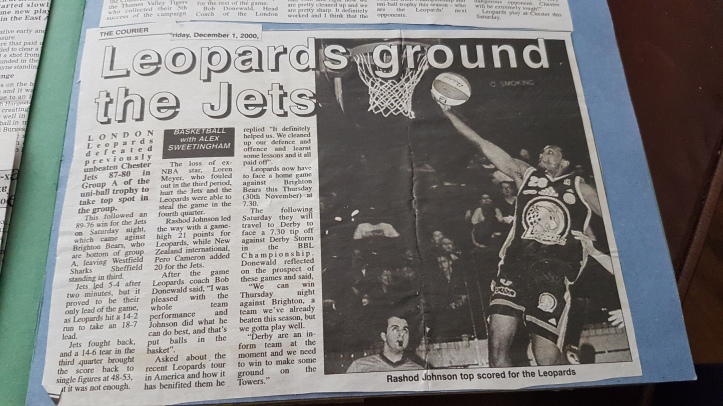