A strong second period proved to be key as Leopards powered their way into the National Cup semi-final, on Sunday. A big crowd at the Brentwood Centre saw Thomas Baker’s side beat Manchester Magic 87-76 to progress to the last four for the first time since winning the competition in 2012 .

Luke Mascall-Wright came off the bench to lead the Big Cats with 18 points and six rebounds, while captain Sam Newman added 14 points and four assists . Hodges finished with a ten point, 15 rebound double-double, while Rory Winter and new American signing KJ Lee – who was only cleared to play the previous afternoon – added 11 apiece in a balanced scoring effort which also saw Chuck Duru finish with ten points .
Leopards’ ability to push the ball proved to be vital as they outscored the visitors 29-12 on the break and also punished Magic with 21 points off their turnovers .

Duru scored from the Land of Plenty to open the game, but there was little to choose between the teams in the early stages and although Lee Hodges made it a five point game with a free-throw, Magic closed the gap to 18-17 at the first break .

Duru again scored from downtown to open the second period, there was still only a point in at the midway stage of the quarter before Lee launched what proved to be the key run . Newman hit back-to-back threes and Andre Lavinier also drained from downtown as the hosts scored 17 unanswered points to lead 42-28 going into the half-time break .
Leopards kept the visitors at arm’s length during the rest of the game, and Lee’s triple sent them into the final break a 66-52 lead .
Magic never got closer than eight points in the fourth period – when Andre Gayle hit a triple to make it 78-70 – and a dagger three from Wood sealed it with 90 seconds remaining .

Gayle finished with a game-high 25 points – although he needed 22 shots and four visits to the foul line – while Jonathon Barnes had an impressive 19 boards to go with his 15 points.

The Big Cats now face a home double header at the University of Essex this weekend with Leicester Warriors the visitors for a NBL Division One game on Saturday (6pm) before Reading Rockets are in town on Sunday for a must-win National Trophy tie, tip-off 4.30pm.

A dominant overtime period saw Levett Essex Leopards break their three game losing streak with a 94-80 victory against Ipswich, on Saturday .
The Big Cats should never have needed the extra period, having led the game for more than 39 of the regulation 40 minutes, and let a 23-point third period lead slip before outscoring the Suffolk side 17-3 in the additional five minutes .
Captain Dougie Bennett led by example with 17 points, seven assists and five rebounds, with Korey Callum adding 15 points and five boards. Jamie Hayes pulled down a massive 19 rebounds to go with his 14 points and Kevin Moyo added 11 points before limping out of the action late in the fourth period with an ankle injury .

A Moyo triple and six points from Bennett helped Leopards open well as they rushed into a 16-4 lead, and a pair of treys from Callum saw them go into the first break with a 24-13 advantage .
Moyo again converted from downtown to open the second quarter before Will Ashby – who was limited to 17 minutes of action due to foul trouble – also hit a trey to put his side ahead by 19 .
A couple of 7-0 runs kept the visitors in the game, but a pair of Jerrell Laine baskets helped Leopards go into the locker room with a 45-32 half-time break .
Ashby again drained from the Land of Plenty as Leopards opened the second half on a 12-4 run to lead 59-36, but a timeout from Ipswich coach John Ellis sparked an 11-0 run from the visitors as they fought their way back into the game,
Free throws from Moyo and Callum broke the run as Leopards went into the fourth period with a 65-50 bbut treys from Winter, Hall and Rai saw the lead shaved to 71-66 heading into the final three minutes of normal time .

Laine’s triple broke the run and he kept the Big Cats in front with a lay-up before Rabi Rai hit a three on the break with 36 seconds remaining to make it a two point game .
Callum hit one of two free-throws as Ipswich fouled to stop the clock and Rai stole the ball from Jamie Rodwell to feed Callum Hawes who sunk a trey with just one second on the clock to send the game into overtime .

After seeing such a large lead obliterated, Leopards could have easily folded in the extra period, but Hayes opened the scoring with a pair of free-throws followed up by threes from Rodwell and Bennett .
A Simbai trey made it a four point game with 1:51 on the clock but that was the last time the visitors troubled the scorer as Shaq Lewis launched the 10-0 game that wrapped up the win. 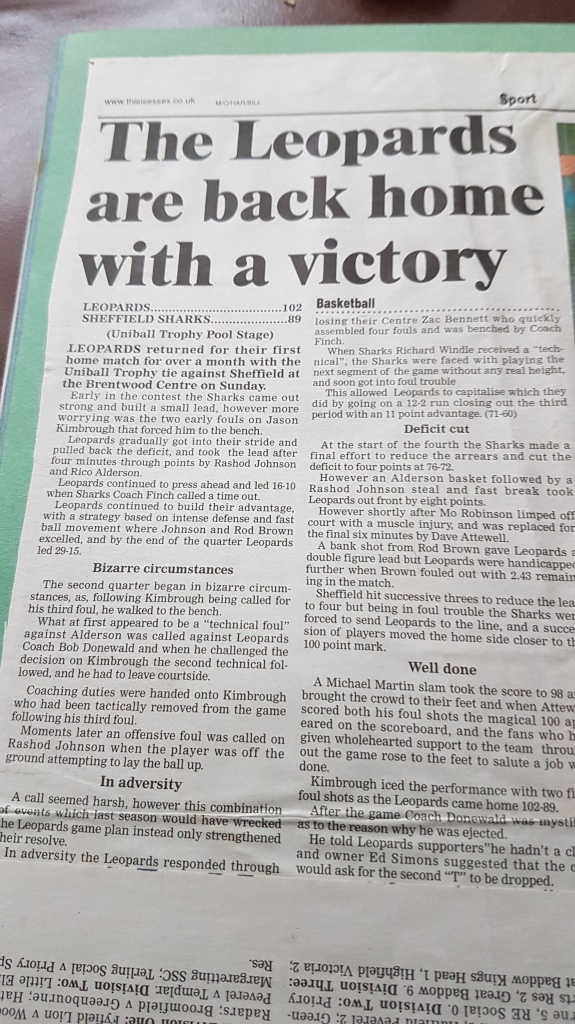