Essex Leopards picked up a pair of victories over weekend, beating London Greenhouse Pioneers by nine points on both Friday and Sunday, The Big Cats led for the vast majority of both their wins against Pioneers, but were unable to pull away and wrap the victories up until the final minute.

Friday’s75-66 win in the capital saw Shaq Lewis lead a balanced scoring effort with 11 points, with Jamie Rodwell adding ten points before limping out of the action with an ankle injury that looks set to keep him out of Saturday’s game against Arrows.

Korrey Callum finished with nine points to complete the top three scorers.
The hosts shaded the first period 13-12 but were outscored 26-18 in the second quarter and 24-15 in the third to give the Big Cats a 62-46 lead at the final break, and they never looked back.

Leopards saw their four game winning streak snapped in controversial fashion at Bristol Academy Flyers on Saturday night as they went down 83-81. Simon Cummings – who hit 17 points in each period on the way to leading the Leopards’ scoring – drove to the basket in the final five seconds and appeared to be fouled twice before being called for travelling to effectively hand the game to Bristol.

That wasn’t even the most controversial moment of the final minute; A steal from Greg Hernandez with 38 seconds on the clock saw him appear to be fouled one the break at half-court, and as Bristol coach Andreas Kapoulas pleaded for the referee to not call an intentional  foul his prayers were answered as the American big man was called for a travel.

Hernandez finished with 17 points and Rowell Graham added nine for a Leopards team who were without Duane Camile, Jamal Anderson and Taner Adu. The consolation for Big Cats’ coach Robert Youngblood was that his side won the head-to-head decider against the Flyers by a single point which would prove crucial if they finish level at the season’s end.  Curiously it was also the fourth straight game the Big Cats had scored 81 points.

Leopards had again fought back from a big deficit having allowed the hosts to score 17 unanswered points in a blistering four minute spell wrapped around the first period break.

A strong fourth period saw Leopards pick up their ninth win in ten games as Leeds Carnegie were beaten 77-70 to seal a place in the top four. The Big Cats were down by four points a minute into the fourth period before a 12-2 run put the hosts in charge and they never trailed again.
Andre Lockhart led Leopards’ scoring for the first time since joining six weeks ago, adding seven assists to his 20 points. Kris Clark finished with 16 points, with Carl Josey adding 15 points and six rebounds, while Howard suffered with foul trouble for most of game but added seven boards to his 13 point. To complete a balanced scoring effort, Courtney Van Beest came off the bench to add ten points and eight rebounds.
Jack Stannard led the visitors with 22 points, with former Leopard Rowell Graham adding 17 points and nine boards as the visitors out-rebounded the Big Cats 51-35.

Shaun Durant, who also had foul trouble, opened the scoring and Leopards quickly rushed into a 7-2 lead and that advantage few to 13-4 following a Clark trey and an and-one from Crawford Eight unanswered Leeds points saw them find their way back into the game before scores from Josey and Clark put the hosts back up by five and eventually went into the first break with a 17-15 lead.
Crawford made it a four point game with the opening basket of the second period, and Lockhart opened his account for the afternoon.
Graham gave his side their first lead of the game with a pair at charity stripe four minutes into the second period and it took until the 2:26 mark for Lockhart to tie things at 26. Amand Anebo restored Leeds’ but Lockhart gave the home side a one point lead with three from four foul shooting after Josh McGinn had fouled him and then picked up a technical foul, and Josey drained a trey to send Leopards into the locker room leading 32-28.
Josey gave his side a six point lead with the first basket of the season half but that quickly evaporated as Graham capped a 9-0 run to put Leeds 37-34 ahead.

Durant was also called for a technical after a foul on Stannard, and the Leeds’ guard sunk three from four at the foul line before a Graham free-throw saw the visitors lead by seven.
Another Josey score from the Land of Plenty ended the tear, and he struck again from long range to cut the deficit to 52-51 going into the final break.
Anebo and Van Beest exchanged baskets to open the fourth period before Stannard put the visitors ahead by four with a trey
But Crawford’s dunk energised his team, and back-to-back Clark baskets gave the home side a lead they would never lose.
Lockhart hit a pair at the foul line and Crawford did likewise to make it a six point game with 5:49 on the clock before Stannard drained from long range off Graham’s assist to force a timeout from Leopards’ coach Robert Youngblood with his team leading by a point and 4:41 on the clock.
Crawford and Lockhart both scored to keep Leopards in front before Graham made it a one point game with a minute remaining.
That was as close as the visitors came as Van Beest answered at the other end and Clark hit a jumper before Clark and Crawford wrapped the win up at the foul line.

Pertemps Bullets Birmingham 80 (25,37,59)
Rashod Johnson 27, John O’Connell 17, Brant Bailey 14
DG London Leopards Kool Kats 86 (19,41,59)
Maurice Robinson 19, Ravonte Dantzler 16, Jason Kimbrough 15
BBL Championship @ Birmingham Basketball Centre
DG London Leopards kept alive their BBL Championship Southern Conference title hopes and all but confirmed their berth in the BBL Championship playoffs with a tricky 86-80 victory over the Pertemps Bullets Birmingham on Saturday night.
The Leopards led for much of the game after recovering from an early Rashod Johnson blitz who scored 12 to help Bullets to a 15-3 lead. Leopards held a crucial 80-77 lead going into the final minutes and despite a three pointer from Rob Paternostro held on to win the game from the charity stripe. 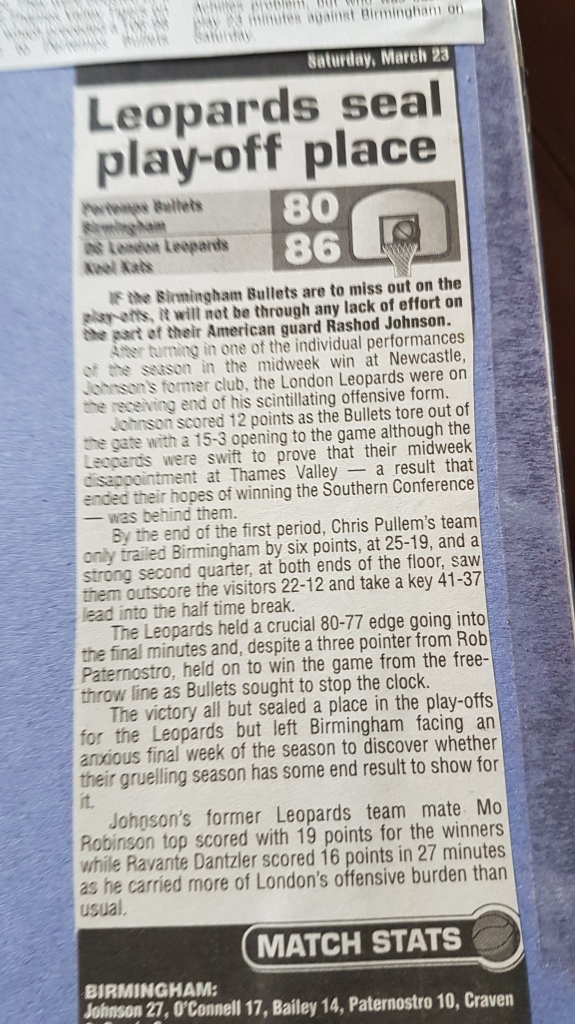