Brighton Bears 87 (12,31,53)
Albert White 25, Sterling Davis 21, Randy Duck 13
DG London Leopards Kool Kats 89 (24,39,64)
Rico Alderson 25, Jason Kimbrough 19, Maurice Robinson 12
BBL Championship @ The Brighton Centre
Brighton Bears missed the chance to go top of the Southern Conference with a 89-87 defeat against the DG London Leopards Kool Kats.
The Leopards were in control for the majority of the game enjoying an 8-0 and a 10-2 burst to lead 49-33 in the third. Brighton came back in the final quarter with an 8-0 tear to trim the score back to 77-80. A Mike Brown three-pointer with 8 seconds remaining took the score to 88-87 to the Leopards, and Maurice Robinson hit 1 from 2 at the line with three seconds left, and a Sterling Davis missed the shot on the buzzer. Albert White led the Bears scoring with 25 points, while Rico Alderson enjoyed a double-double 25 point, 16 rebound haul for the Leopards. 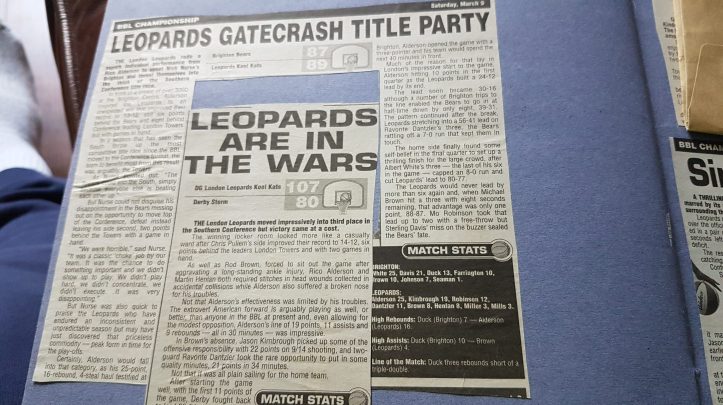 Manchester Giants 80 (13,32,54)
Handy 26, Dorsey 24, Hairston 12
adidas London Leopards 77 (13,30,48)
Johnson 28, Mensah-Bonsu 17, Martin 10
Dairylea Dunkers Championship @ MEN Arena
Phil Handy spearheaded the Manchester Giants onto an 80-77 home victory over the adidas London Leopards as the Giants bounced back to keep their run of never losing successive games alive. In Giants last game, they were defeated by Leopards’ cross-town rivals, the Towers.
However, Handy led the Giants scoring with 26 points, including 15 successful foul shots from 16 attempts. It was a game that remained close throughout – the scores were tied at 13-13 after the opening period, but then the Giants edged ahead.
The Leopards, who were without suspended coach Bob Donewald, as well as injured Jason Kimbrough, had Rashod Johnson as their top marksman – he scored a game-high 28 points.