The Big Cats came up just short in Newcastle on Saturday on a day when little went right for them leading to a second league loss of the season. They were tied at 65 with five minutes remaining and only 72-70 down with 2:17 on the clock but a couple of turnovers down the stretch proved costly for them.

“Poor first and third quarter put us in a difficult position” admitted assistant coach Roger Malpass who, along with veteran guard Ronnie Baker, coached the team in the absence of the unavailable Robert Youngblood. “Determined efforts from Albert [Margai], Dave [Ajumobi] and Courtney [Van Beest] along with some excellent defence from Matic [Zupanc] in the second half enabled us to get back into it.

“At 72-70 down poor decisions and two turnovers were compounded by fouls on the resulting plays cost us. Well, that the 12-26 foul count in their favour and the fact that they scored 29 points from 27 free-throws while we only had nine foul shots all night!”

The Big Cats led 11-9 after five minutes but were outscored 17-5 in the rest of the period to trail 26-16 at the first break.They pulled to within six at the mid-point of the second period, and Ajumobi cut the deficit to 43-41 going into the locker room at half-time.

A six minute third period drought helped the hosts take a 64-52 lead into the final period before Northumbria were held to just one point in five minutes to set up a tense finish.

Ajumobi again led the way for the Big Cats with 27 points, adding eight rebounds, three assists and three steals, while Van Beest had a 13 point, 11 rebound double-double. Captain Margai finished with eight assists to go with his 11 points.

They made hard work of it, but Leopards picked up their fourth Division One victory of the campaign with a hard fought win against Sheffield, on Sunday.

In front of a big crowd at Brentwood, Leopards only trailed for 34 seconds but it took until the final two minutes for them to wrap up the victory.

Leopards’ illness and injury problems continued, with coach Jon Burnell too unwell to attend the game and Ronnie Baker still not well enough to play in the game. Baker stepped up to coach the Big Cats in Burnell’s absence, and he was assisted by forward Sam Richardson who looks to be out of action for several weeks with a badly broken thumb.

Lukas Volskis started in Baker’s place having re-signed for the club on Tuesday, and De Ferrari also returned to the side after missing the last three games.

Osemwegie Eboigbe opened the scoring for Arrows, but Leopards’ reply was swift as Greenan, Latham-Henry and Marlan Henry all scored in a 6-0 run.

Arrows’ game-plan seemed to be to fire as many three-pointers as possible, but they struggled to cope with the inside presence of Greenan as he scored six points in the quarter, and with Latham-Henry adding four and Chris Michaelides hitting a trey the home side led 22-15 at the first break.

Both sides struggled at the foul line in the early minutes of the second period, Arrows’ Andrew Purnell scoring the only charity shot as both sides went to the stripe four times.

A Jonny Wright trey gave Leopards a ten-point advantage after two minutes of action, and with Volskis also scoring from downtown the home side held a comfortable double-digit lead for most of the period before Ant Oxley hit a trey to make it an eight point game, but a pair of Latham-Henry free-throws sent the Big Cats into the locker room with a 42-30 lead.

Sebastian Chitagu opened the second half scoring for Sheffield as he moved towards his game-high 26 points, but Leopards looked to have put the game to bed with a 9-0 run.

Greenan five points in that tear as Leopards moved into a 19 point lead to force an Arrows time-out.

Sheffield coach Pete Kelly’s words obviously worked as Arrows answered with 11 straight points – including five from Chitagu, and although Latham-Henry broke the tear with back-to-back baskets, Arrows scored the last five points of the period to cut the hosts’ lead to 55-48 at the final break.

That lead shrunk to two points as Chitagu opened the scoring followed by a Chris Mason and-one.

Leopards looked to have weathered the storm thanks to baskets by Latham-Henry, Volskis and Henry but a 7-0 run saw Arrows grab their first lead since the opening minutes, 62-61 with 3:39 remaining.

Latham-Henry and Chitagu exchanged baskets before the Big Cats finally took control of the game. Volskis hit a jump-shot before Henry buried a three from the top of the key to make it a four point game with 108 seconds remaining. Chitagu halved the lead, but four straight points from De Ferrari followed by a Latham-Henry basket effectively sealed the win, and Laurent Irish and Latham-Henry wrapped it up from the foul line.

Leopards kept up their bid to finish second in the National Trophy Southern Group as they defeated Cardiff Celts 73-54 at Wodson Park on Saturday. Leopards started slowly, and trailed by nine at the midway stage before recovering to go into the first break level at 16-16.

Six points from Hrvoje Pervan in a 13-0 run put Leopards in charge against the Welsh side, and they went into the half-time break 36-25 ahead.

Celts staged in touch throughout the third period, but with Gareth Laws and Ronnie Baker both draining three-pointers, the Big Cats reached the final break with a 56-43 lead.

Cardiff had one last run left in them as a 10-0 run started and finished by R Priddle three-pointers saw them cut the Leopards’ lead to 60-53 with four minutes remaining.

However, Baker calmed the nerves with back-to-back three-pointers to launch a 12-0 run as the Big Cats never looked back.

Baker led all scorers with 15 points, with Laws adding 14, Pervan 12 and Lukas Volskis 10 in a game where all ten Leopards got on the scoresheet. 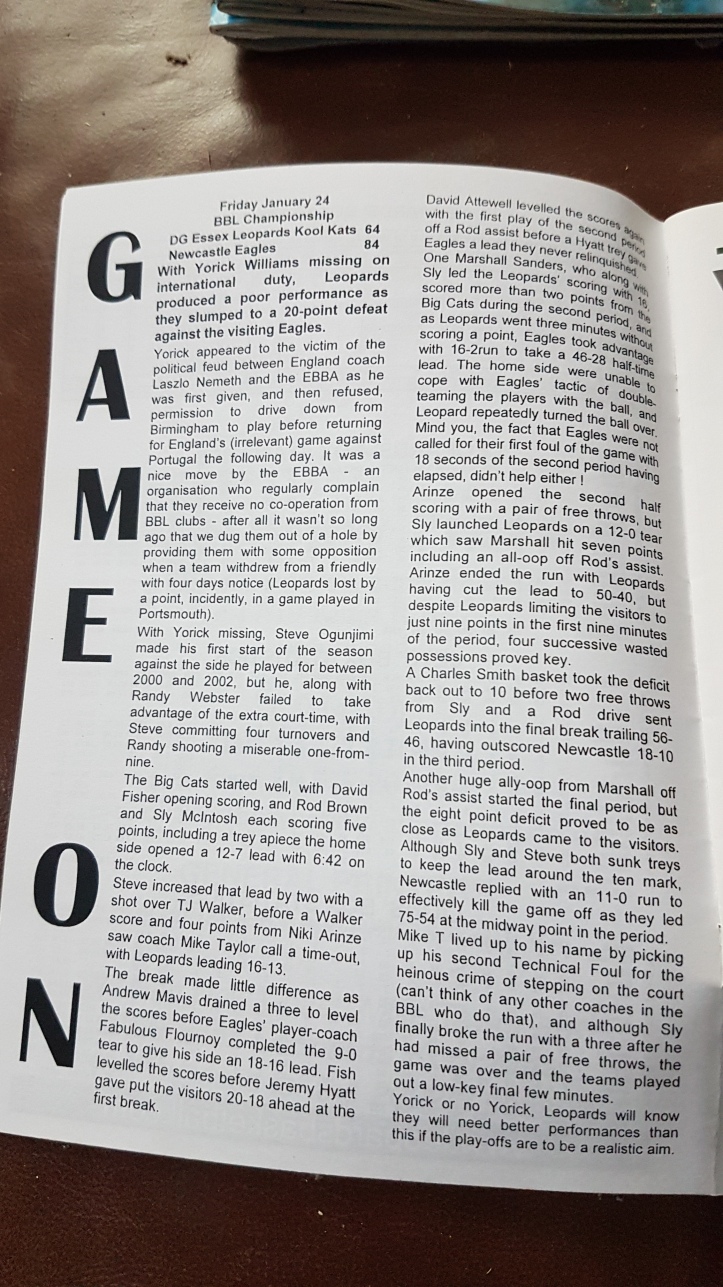